My Own Personal MAD Magazine Collection & Information Website For Other Idiots To Enjoy!

The Latest Issue of MAD On Sale At Your Local Newstand!

My Personal Collection of MAD Magazine Issues and Other Collectable Memorabilia Can Be Yours!(to look at of course) Just Simply Enter Here!(into the website)

This site is basically an information and picture gallery of all my MAD related items like; issues, specials, books, collectibles and anything else I want to include!

This is not a complete collection or a list of everything available to collectors, but rather just what I currently have in my own collection. As I continue to expand my collection I will update this site like my record keeping of sorts! So keep checking back new stuff is always arriving!

Inspired by one of MAD Magazine's most iconic classic and most controversial covers MAD #166 April 1974!

A photo copy of the "Letter of Apology" that was sent out to angry subscribers as a result of this issue's release will be sent with every tags purchase!

Check out these collectible coins at www.pathtags.com

​will ever be minted!

Classic portrait of Alfred E. Neuman on this rare and collectible coin!​​

​The Number One Ecch Pathtag

The Latest MAD Books On Sale At Your Local Book Store!

I WILL PAY YOU FOR YOUR MAD BOOKS! CLICK ON THE LINK ABOVE FOR A LIST OF BOOKS THAT I WANT, NEED, MUST HAVE AND SIMPLY CAN'T LIVE WITHOUT! 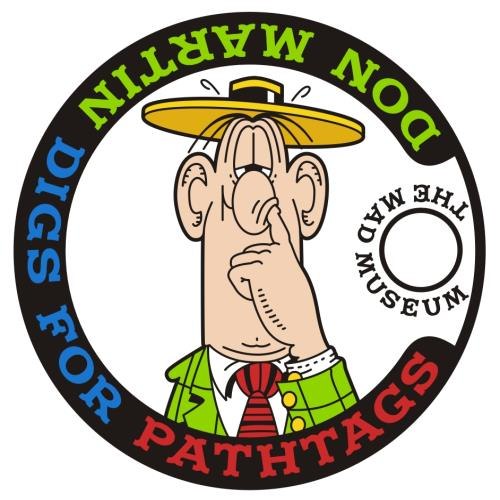 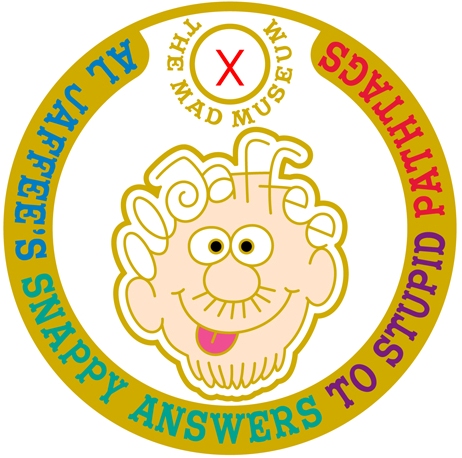 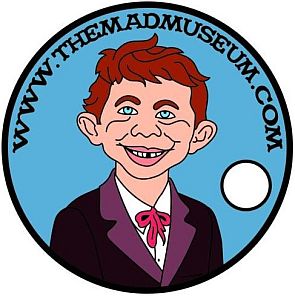 SELL ME YOUR BOOKS 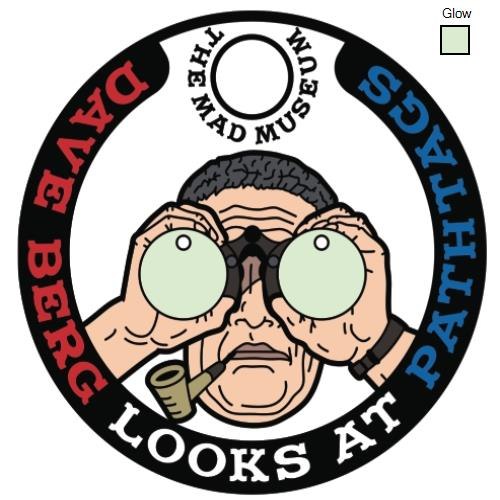 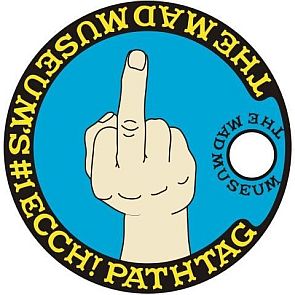 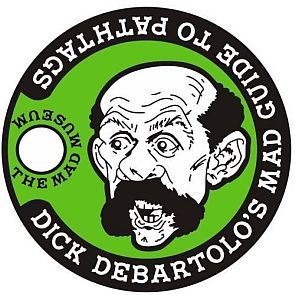 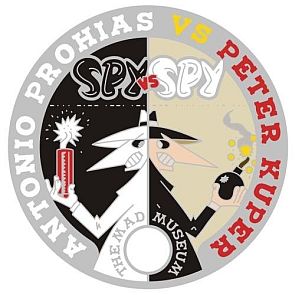 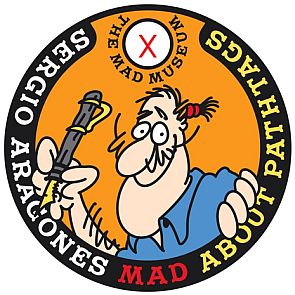 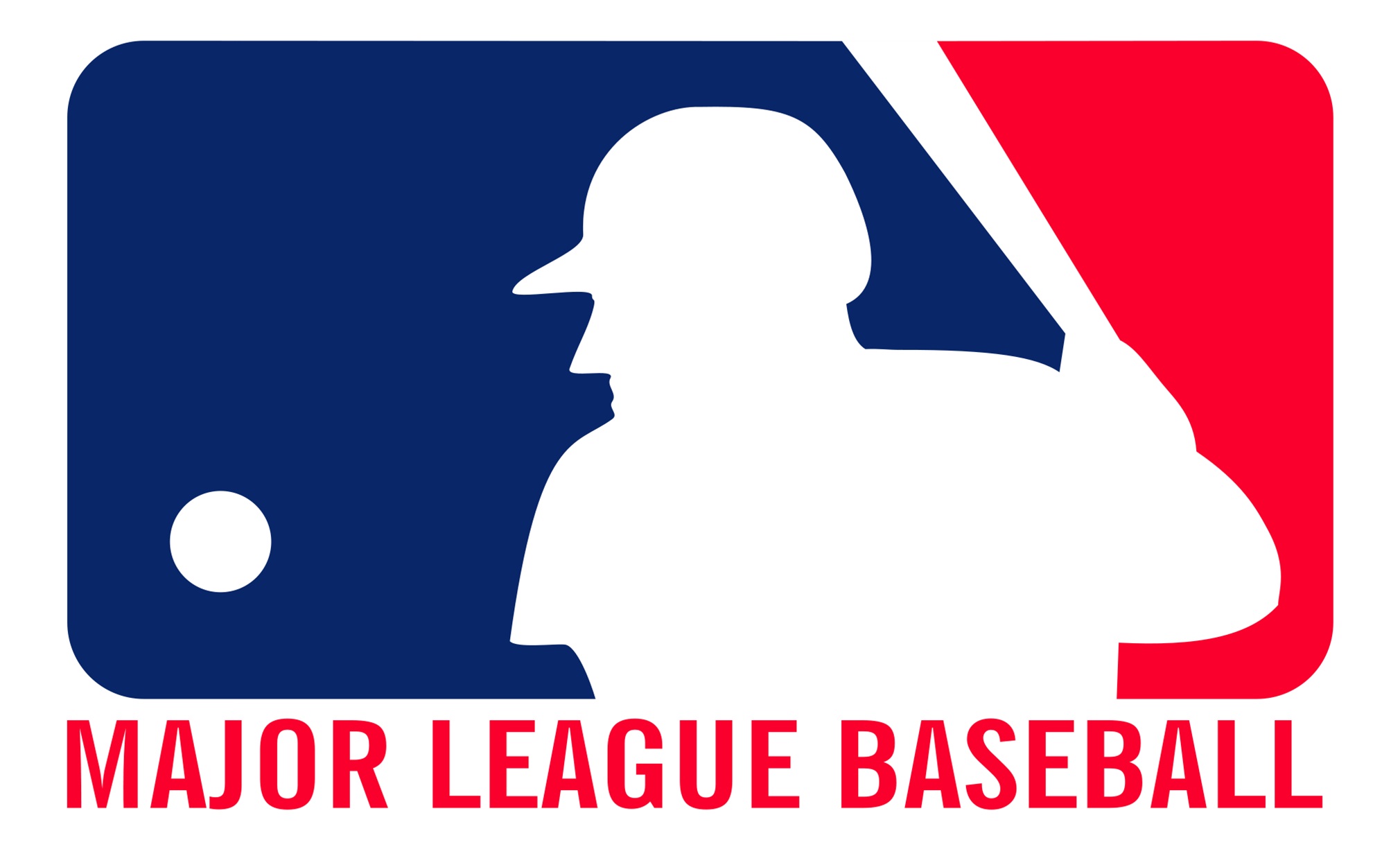 The series debuted in the 1962 October issue of Playboy and ran through 1988-it's 100th episode where the strip was retired.​​

With over 1000 declared candidates for this election... what's one more going to hurt! It can't be any worse than the selection we already have!

Vote for Alfred E. Neuman for President in 2020!

20% Of Each Purchase Will Be Automatically Donated To:

$10.00 Cheap! The Link Will Take You To eBay to Complete Your Purchase!

You are purchasing one(1) Spy Vs. Spy's Grey Lady Spy Mini Metal Extagz.  This tag is reversible showing her classic dress and pose on the front and her more highly classified and sought after assets on the back!

Did I mention the Red Glitter Panties?!!

​​***I highly recommend buying two(2) so you can proudly display both versions of The Lady in Grey!*** 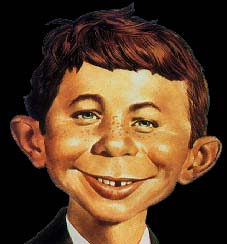 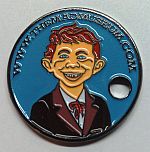 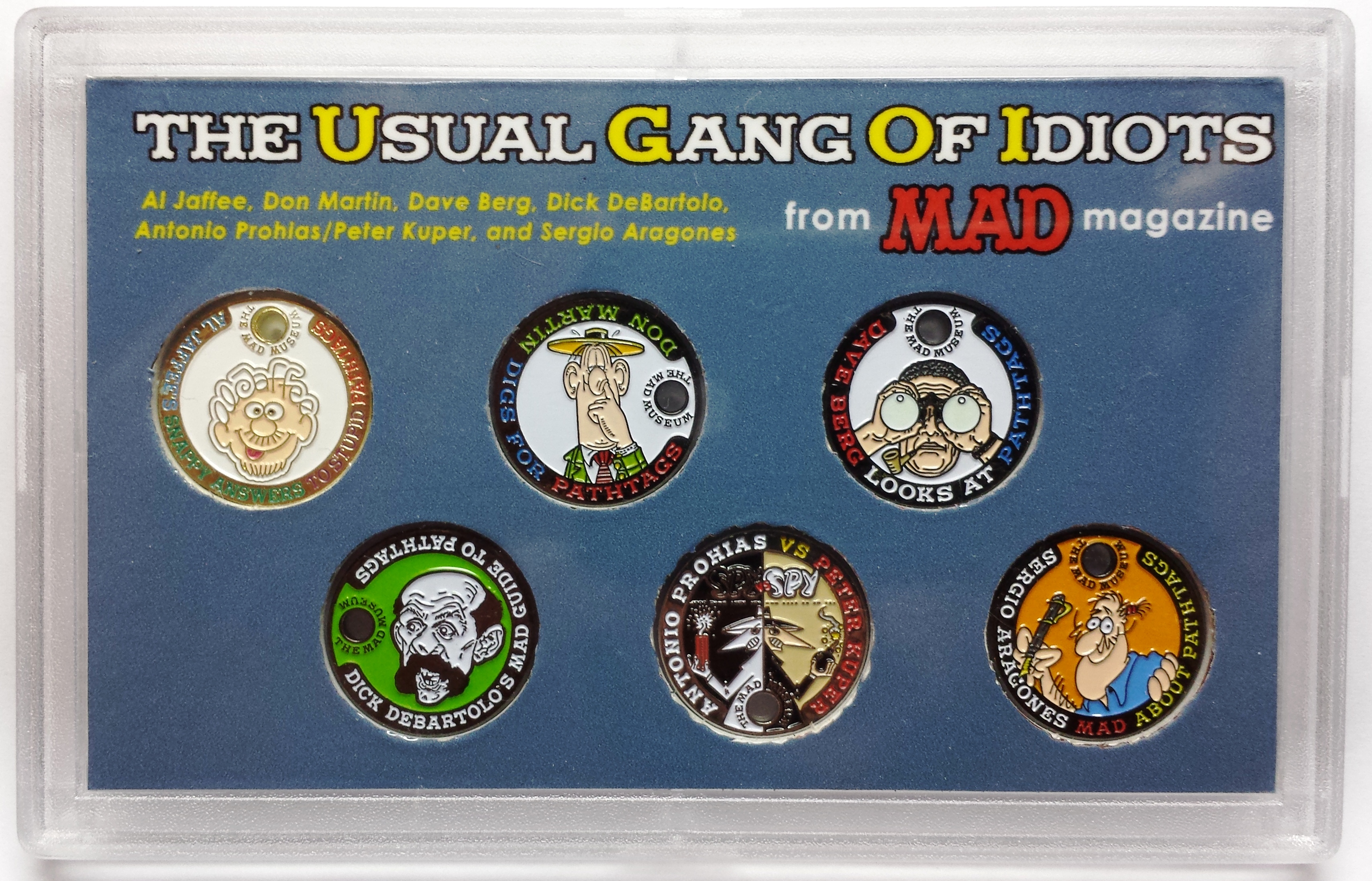 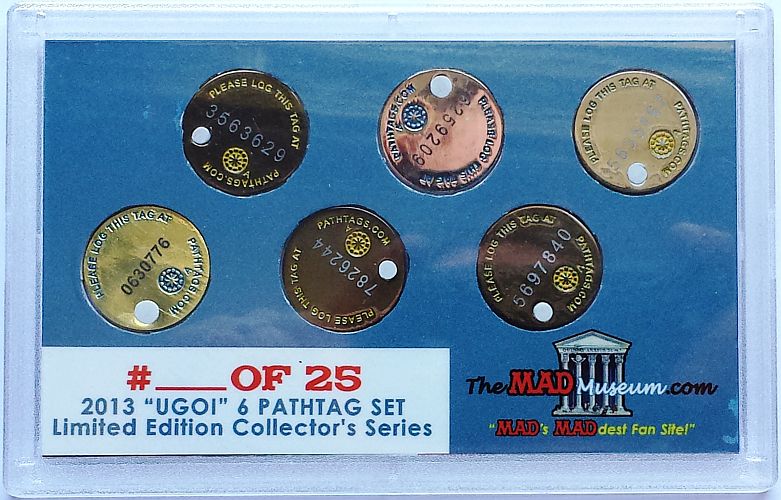 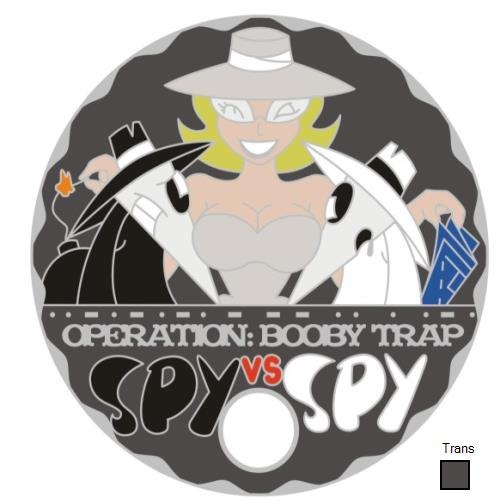 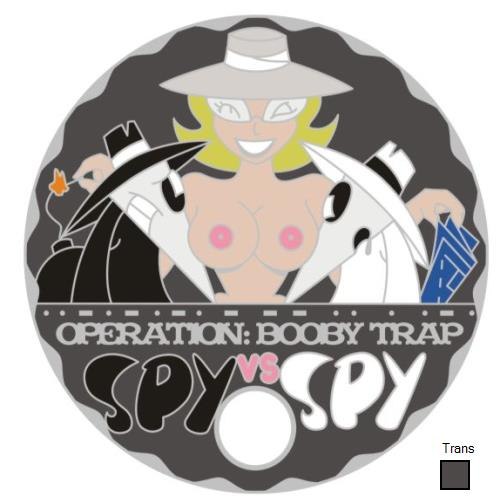 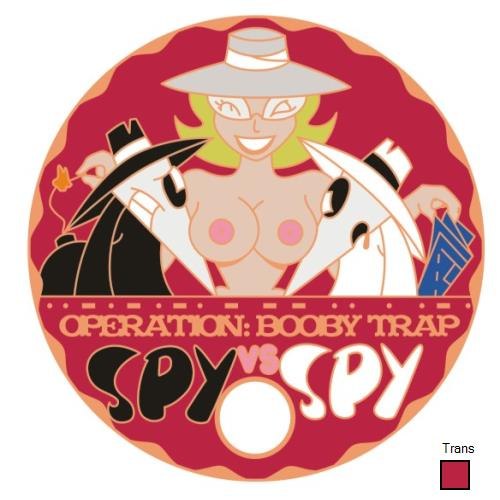 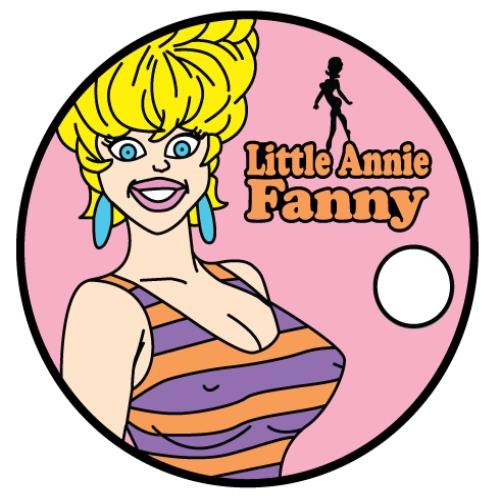 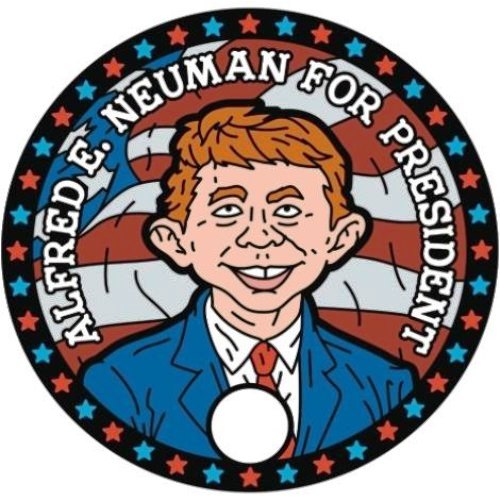 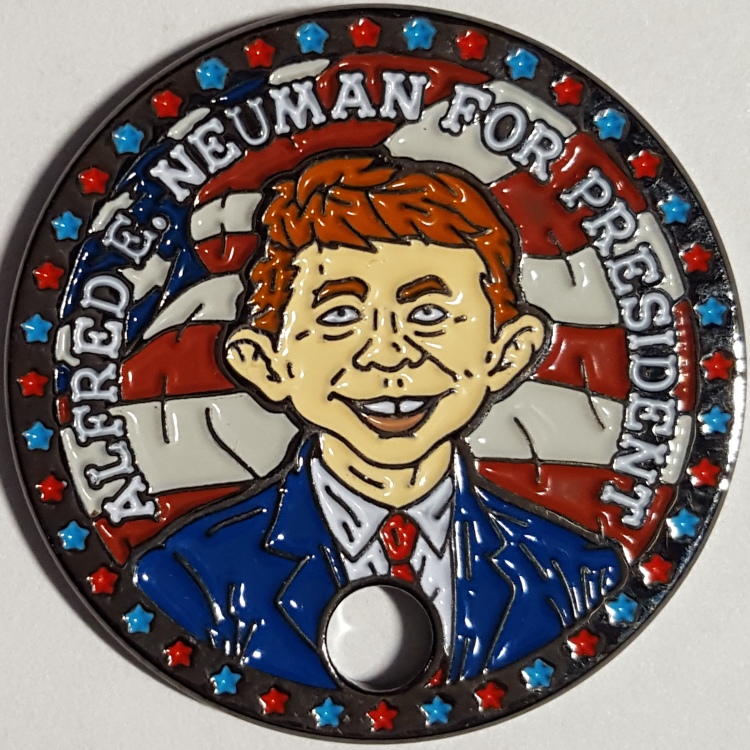 Inspired by a Deviant Art Piece by Chad Rocco.

​The Grey Spy (aka "Lady in Grey") is the third spy. She always defeats the Black and White Spy by using the advantage of the fact that both spies are deeply in love with her.

In 2018 MAD Magazine left New York and relocated their offices with DC headquarters in L.A. Along with that they finished with issue #550 and started over in June 2018 with issue #001 and a brand new redesigned logo!

​Each metal tag measures 30mmx15mm and has had a clear coat epoxy poured over the enamel colors for scratch protection! Two different color variations are available and only 50 of each variation has been made!

NOT MADE IN CHINA!
VETERAN MADE BY AMERICANS FROM EMBLEHOLICS IN GIG HARBOR WASHINGTON FOR AMERICANS…NOT RUSSIAN PUPPETS!!

These are a few of the more popular names and phrases that are used to describe the President and where they came from!

FUCKFACE VON CLOWNSTICK: John Stewart, the former Daily Show host, attached this nickname to Donald Trump during a twitter war after Trump was asking why Stewart changed his name from Leibowitz in May of 2013
ADOLF TWITTLER: Another nickname given to Donald Trump has now become a popular twitter handle to many
WHINEY LITTLE BITCH: Bill Maher, the host of Real Time, loves to call Donald Trump a Whiney Little Bitch and all of his supporters
CROTCH FONDLING SLAB OF RANCID MEATLOAF: Samantha Bee, host of Full Frontal, gave this description of Donald Trump in one of her shows around October 2016
CASINO MUSSOLINI: Trump is often referred to as Americas Benito Mussolini of Italy dating back to 2016
KOMPROMAT: in Russian culture, Kompromat, short for “compromising material” was named by Christopher Steele a spy hired by republicans to collect compromising information on Donald Trump during the 2016 election cycle known as The Steele Dossier which the RNC later sold to the DNC
ORANGE SUPREMACIST: Supremacism is an ideology which holds that particular people are superior to others, and that they should dominate, control, and subjugate others, or are entitled to do so. Orange because of Donald’s odd orange fake tan glow
MAKE DONALD DRUMPF AGAIN: John Oliver, host of Last Week Tonight, promoted a campaign urging viewers to make Donald Drumpf again a play on Trumps Make America Great Again slogan after Trumps family surname from the 1600’s Drumpf
ASSAULTER-IN-CHIEF: A name given to Donald Trump after his many, many instances of supporting, performing and defending sexual assault
45TH SCROTUS: Donald Trump, 45th So-Called Ruler of the United States

Buy an extra one to give to your neighbor!

Bottle Opener measures 3" tall by 1 1/2" wide and a heavy duty 1/8" thick! Will NOT bend or break! Made from polished raw metal so it will not flake off like cheap painted ones! Colors are HARD enamel for durability through the years against scratches!

Sorry, does not come with sound effects like "Ssshhlitttzzz" or "Kerp-Squeeesh"!